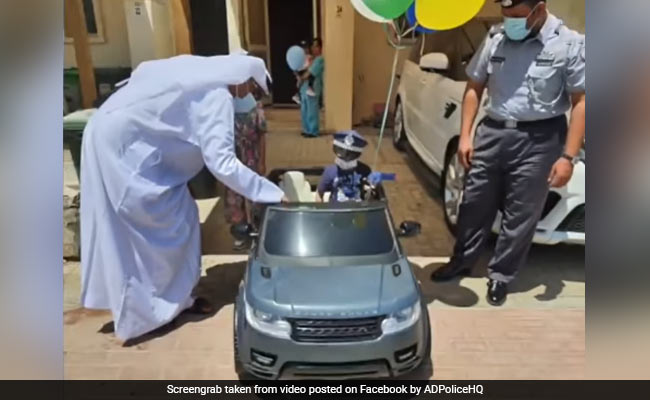 Police in Abu Dhabi presented a four-year-old boy with an electric car.

United Arab Emirates (UAE) police surprised a four-year-old with the sweetest of weekend gifts. Mohammed Al Harmoudi, who is battling a health condition, had always wanted an electric car. Abu Dhabi police decided to put on their Santa hat and fulfil his wish. The department took the boy on a “happiness patrol”, before giving him a new toy electric car, The Khaleej Times reported. Along with the car, Mohammed was also presented with a goodie bag.

A video of the entire incident was shared by the Abu Dhabi police on Twitter and is sure to melt your heart. Take a look.

In the clip, the boy is welcomed with a bunch of colourful balloons. Dressed in a blue shirt and jeans with a policeman’s cap, Mohammed looks visibly excited when two police vehicles pull up next to him.

He is then taken into the car for a ride. He carefully examines the dashboard and steering wheel of the vehicle. He is then presented with the electric toy car by the officers. Making himself comfortable in it, Mohammed looks all set to go for a ride. He is also holding a toy gun. The video ends with the four-year-old happily showing a thumbs-up to the camera.

The clip has recorded over 1.1k views on Twitter, so far. On Facebook too, the video was appreciated with users leaving warm wishes for the young child.

The Abu Dhabi police worked in coordination with the Make-A-Wish foundation to fulfil the boy’s dream.