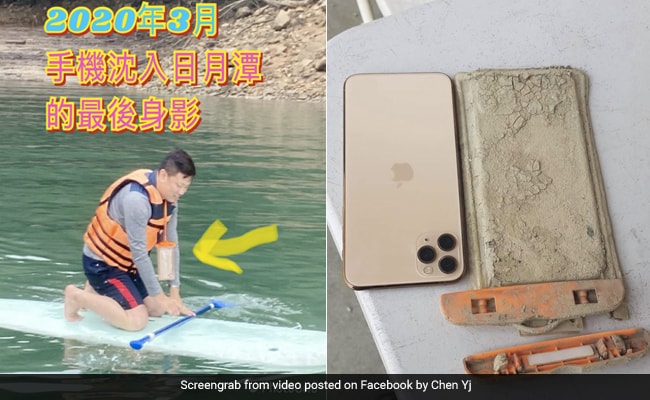 A man found his iPhone as the Sun Moon Lake dried up amid a severe drought in Taiwan.

Taiwan is battling one of its worst droughts in over half a century, but for one man, at least, the drought has brought a stroke of good luck. The man, surnamed Chen, was able to retrieve an iPhone 11 he dropped into one of Taiwan’s most iconic lakes one year ago as the water body dried up due to shortage of rainfall.

Mr Chen said in a now-viral Facebook post on Sunday that he had dropped his iPhone while paddleboarding in the Sun Moon Lake last year.

According to Taiwan News, the lake has turned into a barren wasteland as the island suffers from a severe water shortage. As water levels in the Sun Moon Lake hit a record low, a worker contacted Mr Chen to say that his iPhone had been found. Mr Chen says he could not sleep for excitement after receiving the news.

Though its case was caked in mud, miraculously, the smartphone still worked. Despite spending one year at the bottom of a lake, its waterproof covering ensured that it remained completely dry.

Mr Chen said that the phone worked perfectly after he charged it. He shared photos on a Facebook group to show that the iPhone booted once it had enough power.

The dry spell comes after no typhoons made landfall in Taiwan last year for the first time in 56 years. On Tuesday, more than one million households and businesses in Taiwan’s heavily industrialised central regions were put on water rationing.